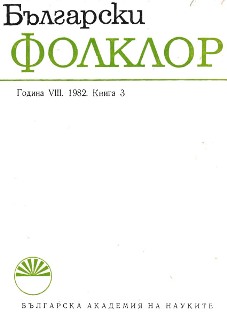 Summary/Abstract: The authors outline the fundamental premises in terms of contents (semantics and energies), as well as the basic points of reinterpretation regarding function and contents, which in their concrete historical succession have formed the unique character of the metrorhythmic system of the Bulgarian folk music and dances. What lays at the base of this is the separation of male and female rituality (characteristic of the farming culture of a patriarchal type) whereby different types of vocal and rhythmical motional activities were formed. In the system of those mutually opposed ritual activities the ecstatic-dancing principle turned mainly in the direction of the male line and was given various connotations: curative (Kalushari, Rousalii), artistic and entertaining (male horo and ruchenitsa) and also parodic and spectacular (mummer’s plays and wedding disguise plays). The prohibition of ecstasy with the woman presupposed an entirely different tone and rhythm whereby the spontaneous psychophysical energies were mastered. Behaviour of a ritual type was modelled characteristic of the most archaic female ritual musical activities – the slow sacral horo with vocalization of the words and some types of the St. Lazar’s Day plays. There gradually formed the basic three-, four and five-beat dance and metrical microstructures while the male motional activity was most often connected with the two-beat asymmetrical rhythms. Those two lines of musical and dance ritual activity (male and female), those two essentially different types of energies, moods, impulses and rhythms, gave in the process of their fusion and interrelation and in definite historical moments the impetus to the entire further development of the Bulgarian folk music and dances in the direction toward artistry.