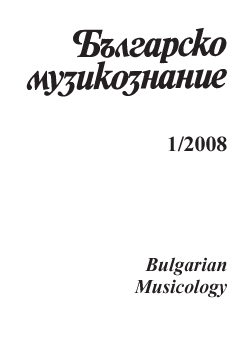 Summary/Abstract: The end of Part І of the present study (Bulgarian Musicology, 2007, № 2) noted the classification of Revival Era songs into four basic groups, which have been generally accepted by scholars: school songs, revolutionary songs, romantic-lyrical songs and historical songs. Behind this classification system, which is connected to the songs’ verbal content, lie deeper reasons for this division: the grouping reflects the connections between various groups of songs and different types of subjects, which reveal various aspects of the transformation of the subject from the traditional type to the Revival Era type of individual. Thus, school and revolutionary songs are connected with that which I call a group subject – a successor to ritual youth initiation societies. In romantic-sentimental and elegiac songs, the individual’s intimate spaces formed in such a way that he or she recognizes him or herself of the self-contained bearer of subjectivity - that which I call the intimate subject. Finally, in late historical songs due to the personal level of the experience attained, the Revival Era concept of “the Bulgarian people” is formed - that which I called the historical subject. At the same time, in various types of songs different psychological aspects are worked out and traditional psychological attitudes are transformed so as to harmonize with new Revival Era ideas and values. Hence school songs emphasize the category of the mind (reason) in combination with the will, directed inwards, which overcomes mental laziness and inspires one towards mental effort - the work of the mind in the field of abstractions, which breaks down the limitations of pure instrumental thought and rationalizes mythical time-space attitudes. Rebel songs rework the category of the emotions, urging them to overcome the laziness and limitedness of the heart, which has to expand the boundaries of its emotional attachment to familial-local identities in order to encompass the pan-Bulgarian and from there to transform into the will, directed outwards, for quick revolutionary action. In romantic-sentimental songs the internal (intimate) space of the soul is the space of aesthetic contemplation, in which the individual contemplates his own experiences and thus becomes conscious of his own individual soul. Finally, in late historical songs the category of historical memory is construed as a super-individual, meta-personal category like the “national spirit” (according to one famous Revival Era song), which unites Bulgarians in time and space. Various melodic models are examined, which are connected to the delineated song groups; the concept of Revival Era song-melodic types is introduced. Thus begins the formation of a musical semantic layer of a modern European type, different than the folkloric-genre-semantic layer, as well as the medieval-Orthodox level of semantic meaning. At this level certain melodic models of the traditional-folkloric type also receive secondary...