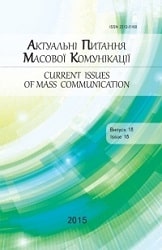 Використання українськими медіа фреймінгу як інструменту маніпуляції (на прикладі критики президента України у 2018-початку 2019 рр.)
Using Framing as a Manipulation Tool In Ukrainian Media (Based on the Critics of the President of Ukraine During 2018 to the Beginning of 2019)

Summary/Abstract: The concept of framing is poorly used in Ukrainian media studies but widely presented in foreign researches. This concept refers to media coverage of events in the context of a particular social problem. The objective of the study is to establish the laws of using the framing by leading Ukrainian media using the example of the resonance topics that were critical to the President of Ukraine Petro Poroshenko during January 2018 – January 2019. In particular, using framing for the latent media bias. As a result, we see that only qualitative media who have an expert view of any problemas well as extremely biased media, use mainly its own unique framing and set framing for other media. In other cases, framing is mainly given to media by communicators: speakers, official institutions or investigative journalists quoted by the media. Perhaps this is because news feed editors and journalists just do not have enough experience to create their own framing. So, there are huge opportunities to influence the framing of the media. Communicator may create press releases about particular facts adding some specific context to the plain fact. It is likely that most media will adopt this framing. The opposite situation can only be when opponents or bloggers will quickly set a counter-framing of a certain topic, changing the context to the opposite. Another conclusion from the described situation is that framing in Ukraine is seldom used by leading media and is, therefore, rarely used as a subtle tool of manipulation. It happens because Ukrainian media space enables direct violation of journalistic standards: value judgements and labeling in headings and in the media publication itself.