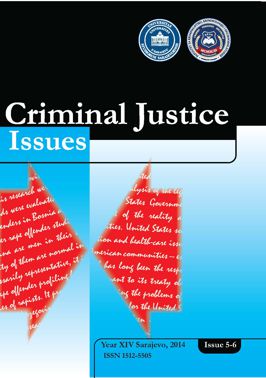 Summary/Abstract: Inspiration and the research problem: According to theory, as well as previous research, organized crime and corruption offenses often go hand in hand. While organized crime actors use corruption to achieve their criminal acts, definitions of grand corruption, political, systematic, administrative, and corporate corruption, encompass elements of organized crime. Thus, it can be expected to find the mentioned link in the final verdicts of criminal courts. Objective: The main objective of the paper is to discover and describe relations between organized crime and corruption in the final verdicts at selected Bosnian courts. Methodology: Method of data gathering was document analyses. We have paid special attention to the Court of Bosnia and Herzegovina where we analyzed 313 final judgments for organized crime cases, as well as to the Municipal Court in Sarajevo and the Cantonal Court in Sarajevo, where we analyzed 89 judgments of corruption offences. Method of data analysis was statistical method (method of descriptive and inferential statistics). Limitations: This paper is not going to explain the link between corruption and organized crime in general, but it is limited to searching this link in judicial documents. Also, the research results are limited to three selected Bosnian courts. Results: Despite the mentioned theoretical frameworks and findings, this article shows very weak ties between organized crime and corruption in judicial documents. In the end, results indicate unexpected indicators of judicial corruption with elements of organized crime. Because of such large differences between theoretical remarks and the results of this research, the article raises more questions than provides answers. These questions should be topics and inspiration for future research. Justification: The research tests theoretical assumptions related to the link between two criminal behaviors. This indicate a significant scientific justification. Also, informative character of the paper could have some influence on policymakers and some policy implications could be caused.