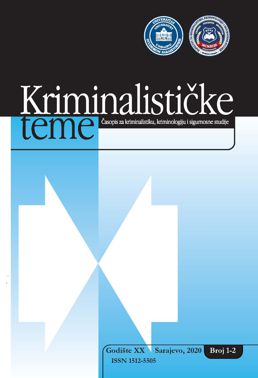 Korupcija u javnoj službi u BiH
CORRUPTION IN BOSNIA AND HERZEGOVINA – A MYTH, AN ERROR, OR SOMETHING ELSE

Summary/Abstract: Reason(s) for writing and research problem(s): Based on numerous reports of both domestic and international organizations, Bosnia and Herzegovina is one of the most corrupt countries. However, there seem to be a big discrepancy between what is usually assumed/perceived and the reality. This paper aims to provide facts on attitudes of Bosnia and Herzegovina citizens towards acceptability and reporting of corruption. Aims of the paper (scientific and/or social): This paper provides facts on differences between men and women in Bosnia and Herzegovina, when it comes to acceptability and reporting corruption. Results of this research could contribute to the improvement of public administration functioning, primarily through improved transparency. Methodology/Design: This is a descriptive research about attitudes towards and experience with corruption. Data was collected by CATI (Computer Assisted Telephone Interview) method. The sample consists of 1200 respondents from 134 municipalities in Bosnia and Herzegovina. Research/paper limitations: Due to the fact that the CATI method was used, the main limitation of the research is to be found in the structure of the sample, as only those respondents who have access to a telephone and are willing to take time to respond to questions are included in the research. Results/Findings: The findings suggest that corruption is not as spread as it is usually assumed. Citizens become knowledgeable about corruption primarily based on the information from media and from hear-say. Men are less likely to report corruption. General conclusion: Corruption is a problem in Bosnia and Herzegovina, but not as big as it is assumed. Prevention should be based on raising awareness campaigns, primarily directed to men in Bosnia and Herzegovina.