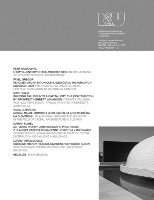 Summary/Abstract: Estonian architecture does not have a long history. Of course, there are many buildings dating back to the Middle Ages that were physically built by Estonian peasants and, in the case of churches, used by them as well, but most of the architecture belonged to the German crusaders who brought Christianity to this land. This changed when Estonians ceased being merely peasants and could become town citizens, but this was not until the 20th century, when Estonians, one of Europe’s oldest settled ethnic groups built their own nation state. During the course of WWI, Tsarist Russia – like many other empires that were made up of a number of different nationalities, and which had seen their day – collapsed. For Estonia, with her newly gained independence, the post war years of the 1920s and 30s meant extremely rapid development, and the last traces of having lagged behind as a result of the supremacy of Tsarist power, were quickly removed. Tallinn, a sleepy provincial town became a lively capital city faced with huge construction challenges. The construction of modernity naturally relied on specially trained professionals and by the end of the Tsarist period a class of Estonian intellectuals had emerged, who were now at the peak of their creative careers and were capable of building up Estonia both as a state and a country. Herbert Johanson (1884 – 1964), one of the most important architects, ranks among those who were instrumental in building up Estonia. Since he was the head of the Tallinn City Design Bureau from 1923 – 1944, his role in modernising the appearance of the capital is particularly noticeable. Tallinn, with barely more than 100 000 inhabitants, was also one of the smallest capital cities in Europe. Estonia has never had great “star” architects who stand out from the rest, but throughout the 20th century, this country has been built by one generation after another, with an invigorating competitiveness within each generation. Johanson was the son of a parish clerk from Haljala in northern Estonia and received his secondary education at the Tallinn Reaalkool (Secondary Science School). It was fairly common for graduates of the Science School to continue their studies at the Riga Polytechnical Institute, which was the only technical tertiary institution in the Lutheran Baltic provinces of Tsarist Russia. Even though, with the wave of russification, the official language of the school was Russian from 1896, the school was actually German in its orientation. As a centre of Baltic-German culture, Riga developed rapidly in the early 20th century from a medieval Hanseatic town into an industrial metropolis. The popularity of architecture as a field is understandable considering the building boom that was under way. Since many students took part in the revolutionary activities of 1905, it was sensible for them to leave the city for a while. In the meantime, Johanson studied at Darmstadt University of Technology from 1906 – 1908, and co