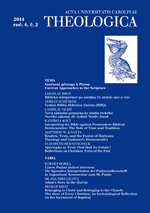 Summary/Abstract: The Qur’ān contains only fragments of Adam’s story in six different sūras, apart from several minor references. These may be arranged into five thematic chapters: (1) the creation of man; (2) adoration by angels; (3) Satan’s disobedience; (4) the fall of Adam; (5) Adam’s genealogy. The aim of the present study is to name the essentials of the Qur’ānic notion of man as a creature endowed with reason. Adam as the specimen of the human race is bound to obey God’s prescriptions. He fails, repents, and is received back and guided. In this way he is considered as the first in the row of prophets of God’s unicity.