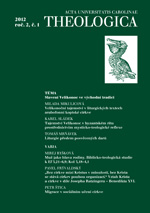 Summary/Abstract: Coptic-Arabic liturgical texts express the Easter mysteries in the rich idiom of the Scriptures and ancient Christian tradition, as seen in the Eucharistic Liturgies of St. Basil and St. Gregory, as well as in hymns and prayers of the Sixth and the Ninth Canonical Hours. They concentrate on the sacrifice of Christ on the cross as connected to that of the Holy Mass. The liturgical texts profess, in accordance to the Creed, the Divine economy of salvation in the incarnation of the Son of God and his crucifixion for human sin, his death and descent to the hell as well as ascent to the Father. Prefigured in Isaac and the Suffering Servant, he is seen as establishing the Eucharistic Sacrament on Maundy Thursday to perpetualize the effects of his sacrifice for participants in the Mass. His trial and his suffering before Pontius Pilate is contemplated, along with his crucifixion, his acceptance of the Thief on the Right. The liturgical texts essentially confess Christ’s death in the human body, his burial and descent to save the deceased, his resurrection and his ascension to sit with the Father. These points are succintly expressed in the ancient Trisagion. Fundamental is the connection between Christ’s incarnation and the redemption as well as between his past work of salvation and its present effect in the Eucharist. Coptic liturgical texts unite catechesis of faith to acting out Christ’s Easter mysteries where the salvatory events happen in the life of the participants.