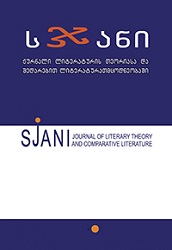 Summary/Abstract: In a previous article we examined the general regularities of the poetics of Ilya Chavchavadze as a representative of critical realism. In order to substantiate our conclusions, it would be useful to identify the main trends in the work of other representatives of this literary direction, and in particular the poetics of Akaki Tsereteli, a prominent representative of 19th-century Georgian realistic literature; identify the common features of critical realism in his work, as well as the specific forms in which they are embodied. When discussing the main features of critical realism (realism of the 19th century), one should consider the problem of the criterion for the classification of literary trends. Roman Jacobson formulated one of the most important principles used as a tool for classifying literary trends. According to Jacobson, either metaphor (synthesis principle) or metonymy (analysis) dominates in various literary directions. This idea of Jacobson was not developed extensively in philology, with the exception of several works, such as “Megahistory” by professor of the University of Constanz, I.P. Smirnov (Smirnov, 2000), in which the most significant and fundamental conclusions are made on the basis of an analysis of world literature. Our study of Georgian romantic literature revealed that, contrary to Jacobson’s opinion, the artistic thinking of Georgian romantic poets is metonymic, analytical. The question arises: which – metaphorical or metonymic – principle of thinking and perception is revealed in realism and, in particular, in the work of Georgian representatives of the socalled critical realism? Naturally, having studied the main features of the poetics of Ilya Chavchavadze, it is necessary to analyze the work of Akaki Tsereteli in this regard. In the study, we took into account the postulates of I.P. Smirnov, expressed by him in the book “Megahistory”. It can be assumed that, in contrast to romanticism, in realistic 19th-century literature not metonymy dominates, but a metaphor, i.e. not analysis, but synthesis. An analysis of the poetics of Ilya Chavchavadze confirmed this assumption. What unites Akaki Tsereteli and Ilya Chavchavadze as realist writers is a metaphorical principle of thinking and worldview in general. This is reflected even in the active participation of Akaki Tsereteli (along with Ilya Chavchavadze) in the so-called the struggle of the “fathers” and “sons”.