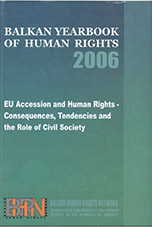 Summary/Abstract: The article is concerned with the finding that Bosnia and Herzegovina (B-H) is making its way toward membership in the European Union (EU) which is not followed by adequate progress in the area of protection and promotion of human rights as defined by international and European human rights standards. According to EU institutions, in the period between 2003 and the end of 2005 BH made a significant progress in the process of Euro-integrations, which resulted in the opening of negotiations for Stabilisation and Association Agreement (SAA) on November 25, 2005. The ambition of the paper was to present a more detailed analysis of that “significant progress” by investigating in particular the state of human rights in BH. As regards the human rights in B-H, the conclusion of the paper is that there is no evidence of significant progress proclaimed by EU and domestic authorities. It is only possible to speak about purely formal developments, in terms of introducing new legislation, transfer or responsibility or transformation of institutions, but the hard fact is that B-H is still a stage of mass human rights violations.