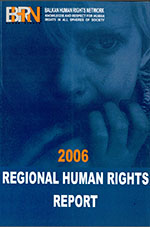 Summary/Abstract: This report represents the review of the Human Rights situation in Bosnia and Herzegovina in 2006 focusing on issues of right to education, right to work for disadvantaged, marginalized and vulnerable groups and access to rights through BiH national human rights institutions. Although, on the formal level, Bosnia and Herzegovina has unique system of protection with the European Convention for the Protection of Human Rights and Fundamental Freedoms directly applicable through the Constitution of BiH, the violations of human rights have occurred in every segment of society in Bosnia and Herzegovina throughout 2006. In respect to the right to education the fragmentation of the educational system leaves a lot of space for misuse, manipulation and politicizing of the education system and consequently for violations and discriminative applications of right to education. The most obvious example of violations and discriminative applications of right to education is application of apartheid like concept of segregation in schools known as "two schools under one roof'. Even though prohibited by law and publicly condemned by the international community, this "phenomenon" is still present in 54 schools throughout Bosnia and Herzegovina. In addition to this gross violation, it is important to mention serious violations of the access to right to education to the returnees and their children as well as to Roma children. In respect to the access to human rights through BiH national human rights institutions in 2006 it is only the Constitutional Court of BiH that could be singled out as effective mechanism for the protection of human rights in BiH. However, the Constitutional Court of BiH has jurisdiction only to monitor implementation of the European Convention for the Protection of Human Rights and Fundamental Freedoms and non-discrimination in respect to the enjoyment of rights and freedoms as provided by the international documents listed in the Annex I of the Constitution of BiH. There is no institution in charge of monitoring the implementation of the international mechanisms for the protection of human rights signed and ratified by Bosnia and Herzegovina. The institution of Ombudsman in BiH has shown ineffective and upcoming merger of the Office of Ombudsman of BiH and entities' Ombudsman has put forward the concerns that this merger will only confirm the existing consociation and make the system for the protection of human rights in Bosnia and Herzegovina even more vulnerable. Considering the fact that during 2006 the number of unemployed almost equalized wit the number of employed it is not hard to conclude that most of the citizens of Bosnia and Herzegovina is denied the right to work. In this situation the disadvantaged, marginalized and vulnerable groups have been placed in even harder position in respect to access to work.