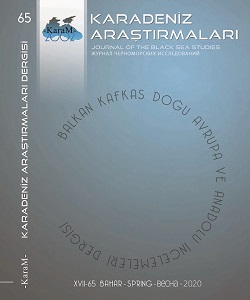 Summary/Abstract: Turkey-US relations began as missionary institutions and commercial activities since the beginning of the 19th century, it were continued with limited negotiations during the First and Second World Wars period. With the signing of the Truman Doctrine and Marshall Plan between the two countries after the Second World War, the relations turned into multilateral relations. With Turkey's entry into NATO, the relations were taken within the framework of independence. However, Johnson's Letter in 1964 strained relations and finally because of Turkey’s Cyprus Peace Operation in 1974, Turkey-US relations were disrupted. With the Defense and Economic Cooperation Agreement signed after 1980 and the Strategic Partnership Agreement signed after 2000, it has reached the dimension of dependency again. After the Gulenist coup attempt carried out against the government in Turkey on July 15, 2016, serious breaks occurred in relations between the two countries. However the two countries held some negotiations to seek alliance ways again despite their reservations, because the USA has become a neighbor of Turkey after the American intervention in Iraq in 1991 and after the civil war that began in Syria in 2011. In this study, we will describe in the historical process of Turkey-US relations over the Syria issue, since 2011.