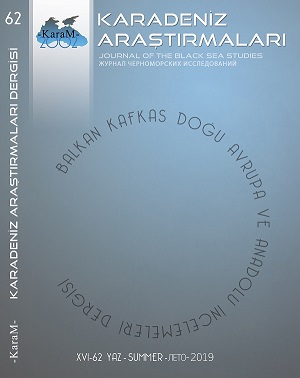 Summary/Abstract: Eastern Mediterranean is at the junction of Asian, European and African continent; Eastern Mediterranean is considered to be the east of Tunusian,-Sicily line, and The Strait of Gibraltar provides access to the Atlantic Ocean and other continents and also it is possible to penetrate the Indian Ocean from the Red Sea via the Suez Canal. The Eastern Mediterranean, which also provides access to Black Sea through the Turkish Straits it is one of the indispensable aim of the states that want to be global power. For this reason global powers which are influential in the world in every period of history, have been in a struggle with each other in order to control this region. Today the Eastern Mediterranean began to be dispute about energy reserve. The reserve amount determined today is estimated as 10-15 trillion cubic meters of natural gas and 2-3 billion barrel of oil. Another perspective, approximately 40% of the words oil and natural gas reserves are located in the Eastern Mediterranean. Fort his reason Greece-Southern Cyprus Administration, United States of America, France, Italy, Egypt, Israel and Jordan directly China and Russia are indirectly involved in imperial initiatives related to the region. One of the longest countries in the Eastern Mediterranean Cost of Turkey and Turkish Republic of Northern Cyprus as a guarantor made for areas within it’s continental shelf can not be expect to remain unresponsive in imperial ventures. First at all, İt’is necessary to make necessary initiatives related to this issue which is a national security problem. In this study imperial initiatives and aim in the Eastern Mediterranean and Turkey’s response has given the national and international levels. We will evaluate the risk and opportunities.