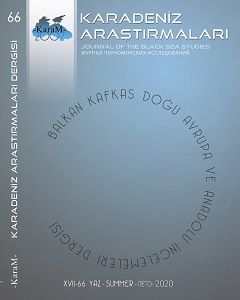 Summary/Abstract: Libya, located on the Mediterranean coast of North Africa, due to its rich-quality oil reserves, strategic position and social structure based on tribes, has always been the target of imperial countries. Especially, being neighbor to Europe via the Mediterranean has made it easier for Libya to become a colonial area. Libya, occupied by the Arabs in the 7th century came under the domination of the Ottoman Turkish Empire in 1552 and remained under Turkish domination until 1912. Libya, which remained under the mandate of Italy until the Second World War was left to the control of France and then of the United Kingdom after the Second World War. Although Libya gained its independence in 1951, it continued to be the country that imperial countries have always dealt with both during the 1951-1969 King Idris period and in the 1969-2011 Muammar Gaddafi period. The NATO operation carried out in 2011 was a result of the imperial countries disagreements between each other. For this reason, a united political organization could not be established in Libya after the NATO operation. This conflictual structure formed in Libya; In the country, it has led to the emergence of new actors such as Russia and Turkey. However, it is a fact that these two countries will not be sufficient for the emergence of a united political organization in Libya and on the contrary, the Libya problem is addressed on a global scale. In this study; firstly, we defined imperialism in the introduction, and then explained the problem of Libya in a multidimensional way, and put forward the solution processes and the events that have developed up to now, within the framework of the approaches of all parties related to Libya and with an academic approach.