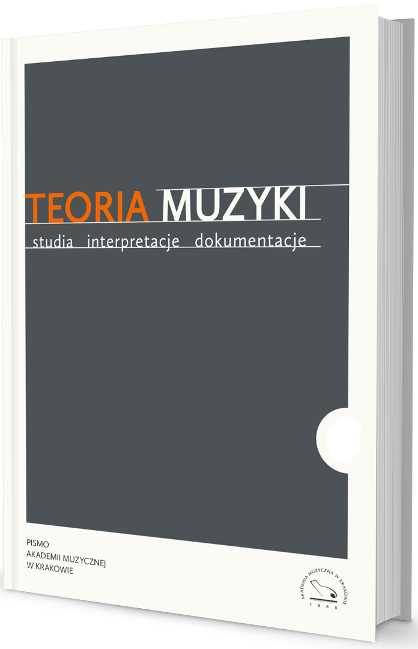 Summary/Abstract: The subject of this reconnaissance is a quite particular situation that took place in the territory which in the old Poland used to be called “K r e s y ”, that is the lands situated to the east of the Bug River in the times of R o m a n t i c i s m a n d M o d e r n i s m, i.e. the period of a nation without a state. The nature of this situation may be defined as “heterogenic hybridity”. Its anthropological and cultural particularity consists of a co-existence of two cultures: the one of “high” nature, reigning a t c o u r t s and folk culture – dominating village c o t t a g e s. Polish culture most often ruled the courts, whereas in the cottages these were respectively: Ukrainian, Belorussian and Lithuanian cultures. The moment that inspired the author to consider the subject defined by the title was the realisation that during the discussed period, except for Chopin – a l m o s t a l l s i g n i f i c a n t P o l i s h c o m p o s e r s were born in the area described as K r e s y and lived out at least their youths in a situation diversified in terms of class: Stanisław M o n i u s z k o was born in the Belorussian lands, near Minsk, Juliusz Z a r ę b s k i in the region of Volhyn, Mieczysław K a r ł o w i c z in the Vilnius Region, Ignacy J. Pa d e r e w s k i in Podolia, and Karol S z y m a n o w s k i in the region of Kiev. The ears of all of them, since the day they were born, were filled with Ukrainian, Belorussian or Lithuanian music. At first they heard it from their folk nannies (often known by name), later – while participating in village festivities and observing folklore customs, and finally – wandering from village to village and transcribing folk melodies to introduce them in their scores, just as Moniuszko did with his songs and cantatas and Karłowicz with his Lithuanian Rhapsody. The discussed symbiotic situation could not obviously remain without influence upon the shape and nature of the work of Polish composers born in Kresy. Capturing at least their traces and echoes became the objective of this reconnaissance.