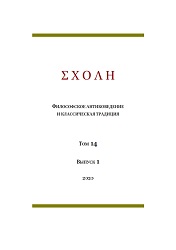 Summary/Abstract: The objective of the article is to demonstrate the paradox of the spread of the Homeric epics: having been created by the descendants of the Achaeans in exile three or four centuries after the Trojan war, they became widespread among all of the Greekspeaking world, i.e. mostly among those who destroyed the Achaean civilization forcing the heroes' descendants into exile. The author poses a question: why do the Greek tribes, who have driven the Achaeans out and took their territory, accept a story of the Achaeans' great past as their own? To answer this, the article suggests a hypothesis that on a profound level the Iliad contains a philosophical idea of the world unity. This idea is not terminologically defined in the epics, however, it is presented as a philosophy-of-law concept of responsibility for one's own decision (free will). This answer is based on analysis of the long similes in Iliad and the instances of interrelation of gods and men and the decisions made by the former and the latter out of their free will.