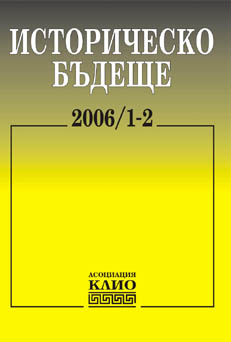 Summary/Abstract: On the basis of varied sources, including hitherto unpublished Ottoman Turkish documents (mainly heritage lists of people who died in the process of going to hadj) this articles tries to assemble a more general notion about how hadj was practised by he Muslims who inhabited present-day Bulgarian territories in the first centuries of Ottoman domination. The text consists of five individual parts. These have respectively been dedicated to: 1) the means by which the title of hadji was acquired and used; 2) pilgrimage routes, organisation and duration of a hadj pilgrimage; 3) the social make-up of the pilgrim community; 4) the demographic characteristics of the pilgrims leaving for Mecca and the economic strategies they followed directly before they left and during the very trip to hadj itself; 5) newly-converted to Islam hadji. Several more important points can be distinguished in the study. In the first place, strating from the frequent use of „hadj“ not only as a pilgrim title but also as a personal name and taking into account the Shariah guarantees for opportunities of „extra-curricular“ hadj or even one after death, as well as some other — albeit illegitimate from a Shariah point of view means of attaining the honorary hadji title, the author provides arguments in favour of the thesis regarding the relatively high share of „pseudo-hadji“ registered in the sources and, from there, about the impossibility to establish a reliable „hadj pilgrimage standard“. In the second place, the study attacks the prevalent opinion in Bulgarian historiography as regards the „elitist“ character of hadj. True, it turns out that the average hadji was a citizen rather than a peasant, but at the same time he was a craftsman or a merchant rather than asker, and not particularly affluent at that. What is more, the author claims that, in actual fact, through its specific mechanisms hadj played the role of something that seemed to redistribute resources — be they economic or prestigious — within the framework of provincial Muslim communities, whereby it contributed to toning down social tensions among Muslims and to the closer knitting of the umma (community) on a local scale. In the third place, underscoring the great store Muslims set by hadj as a prime distinctive feature between „believers“ and „infidels“, the author tries to show that the newly converted to Islam aspired after the title of hadji as they regarded it as a peculiar Muslim certificate of reliability, which would contribute to their easier and painless integration into the Muslim community.