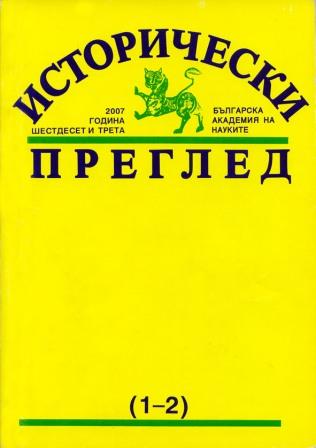 Summary/Abstract: The first part of this article attempts to identify the Mighty Sklav - a hero in several songs from the so called janissary series in the Bulgarian folklore. It is long known, that the actual prototype of this folk hero was a historically established janissary commander from the first half of XVII century, who was named exactly as his counterpart in the song - the Mighty Sklav. That person was mentioned in a Bulgarian marginal note that relates the dramatic events which happened in the village Maglish (Kazanlak region) in the year 1623, connected with the levy of the so called blood tax. In this study, based on an analysis of Ottoman, Greek, and etc. sources, the author proves that behind the Mighty Sklav from the marginal note from 1623 in fact, probably stays the future grand vizier of the Ottoman empire Bayriam pasha (deceased in 1638). The second half of the article deals with the .transformations. of the Mighty Sklav in the Bulgarian folklore and the historical memory. The author reflects on the reasons that prompted the folklore conversion of the Mighty Sklav first into a Bulgarian and later on - into a Greek, while the real prototype, the great vizier Bayriam pasha was in fact a turk.