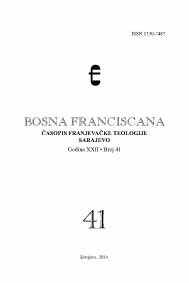 Summary/Abstract: In the history of the Catholic Church there were rare cases of direct denial of pastoral action to the newly-ordained priests by their bishops or Apostolic vicars. One of these cases dates from the end of the fi rst decade of the 19th century, when bishop Fr Gregory Hiljić of Vareš, vicar of the Apostolic Vicariate in Ottoman Bosnia from 1799 to 1813, denied celebration of the fi rst Mass to the newly-ordained glagolitic (Illyric) priests in their home parish Roško Polje near Duvno (West Herzegovina) as well as pastoral action in his Vicariate. Bishop’s letter to the parish priest of the Roško Polje, which ended up in the Roman Congregation for the Propagation of the Faith, as well as the letter of the six village heads of the Duvno area addressed to the same Congregation in favour of the pastoral action of Glagolitic priests on the west Herzegovina and Livno area (South-West Bosnia), witness to this unusual Church controversy. Glagolitic (Illyric) priests, however, found understanding and support amongst the part of the clergy in Split and Makarska dioceses, on whose territory glagolitic (Illyric) seminary was located, more precisely in the village Priko near Omiš (south-east of Split), where they were educated from 1750 to 1808.