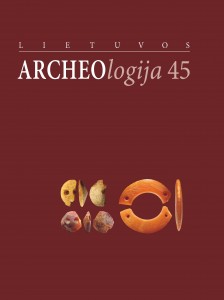 Summary/Abstract: Šventoji 2/4, which is situated on the Lithuanian coast, is among the most important East Baltic Stone Age sites due to the extraordinary preservation of archaeological finds in waterlogged gyttja and due to extensive excavations ongoing since 1967. This paper presents the results of excavations in 2014 and subsequent laboratory analyses. This new research has allowed for the revision of the site’s chronology and function as well as provided valuable environmental data. In 3200–2700 cal BC the site was used as a fishing station constructed in the deepest part of the shallow lagoonal lake. Remains of various fishing gear and other human waste left during fishing expeditions accumulated there. Enormous amounts of cranial fish bones left during the initial processing of the catch that was carried out directly at the fishery indicate that cyprinids, pike, and zander were mostly caught at the site. The site most likely continued to be used in similar way during the beginning of the Neolithic, although Globular Amphora culture fishermen did not process fish on the site and transported the entire catch to dwelling sites instead.