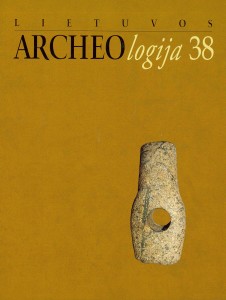 Summary/Abstract: In 2010, 25 samples of burnt food remains, charcoal, human and animal bones, and ceramics taken from 14 prehistoric sites in Lithuania were dated using AMS and conventional 14C and OSL methods. The obtained dates force the dating of the Neolithic and Early Metal Age ceramic types and styles to be changed by several hundred to several thousand years. On the basis of the new data, the Textile ceramic phenomenon began in East Lithuania circa 4000 cal BC. The Narva type ceramics in the Šventoji region are somewhat earlier (3660–3520 cal BC) than the Globular Amphora style ceramics on the coast and in West Lithuania (3450–2920 cal BC). The dates of the Pamariai-Rzucewo culture ceramics (3940–3540 cal BC) confirm the hypothesis that the start of this phenomenon is earlier than the Corded Ware culture in Europe. The first chamotte Corded Ware style date indicates a 2840–2570 cal BC period while the first absolute date (760–515 cal BC) connected with Žalioji (Bratoniškės) type ceramics, supports the hypothesis that such ceramics were used in the Late Bronze Age, not in the Early Bronze Age. Human bones from three cremation urns were dated to 790–380 cal BC. The AMS 14C dates, obtained from burnt food remains, must today be judged cautiously due to the freshwater reservoir effect, which has not yet been investigated in Lithuania, but which could have aged them several hundred years. Two OSL dates obtained from Nemunas type potsherds indicate a 2400–500 cal BC period, but due to large errors they are not reliable.