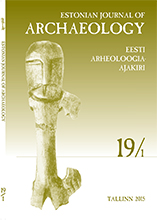 Summary/Abstract: Middle and Late Neolithic (4200–2000 cal BC) of the Lithuanian coast are well known because of dozens of sites that have been investigated and are still being investigated in the environs of the Šventoji settlement as well as on the Curonian Spit. On the contrary, very few Late Mesolithic (7000–5300 cal BC) and Early Neolithic (5300–4200 cal BC) sites have been discovered so far. The aim of this publication is to present archaeological finds and radiocarbon dates from the little-known Late Mesolithic and Early Neolithic Lithuanian coastal sites – Smeltė (Klaipėda city) and Palanga (Palanga city). Both were discovered during constructional and drainage works during the 3rd quarter of the 20th century. Right then and also some time after the discovery both sites were severely or even totally destroyed by urbanization. Today, field research seems to be especially complicated there. Short excavation reports, museums’ inventories, and artefacts themselves – almost exclusively bone and antler tools were the main sources for this study. Direct AMS 14C dates together with the most recent information about the Baltic Sea coastlines enable us to overcome some shortcomings caused by poor field documentation and to put the Palanga and Smeltė sites into the most probable chronological, palaeogeographic and cultural contexts of the southern and eastern Baltic Sea area. Some scientific problems related to sites in question, e.g. the topography of coastal sites, the beginning of pottery and amber production in the southern and eastern Baltic Sea area have also been discussed from several viewpoints.