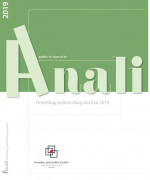 Summary/Abstract: The author analyzes the case of ratification of the Istanbul Convention in Croatia in 2018. After introductory explanations of the basic theoretical and methodological conditions of the analysis, the first part of the article analyzes the text of the Convention. The second part of the article analyzes its political reception in Croatian public at the time before, during and after its ratification. In doing so, it inductively establishes the discourses that both clashed and collaborated, on the basis of repetitive similarities and differences in the utterances that different actors made in the public media. After the discursive framework of the debate is analyzed, the institutional and non-institutional aspects of the ratification process that took place within these framework are presented. Emphasis is placed on the formation of a discursive coalition between advocates of the dominant discourse on violence against women and the discourse on family tradition that, with the Interpretive statement, enabled the ratification of the Convention.