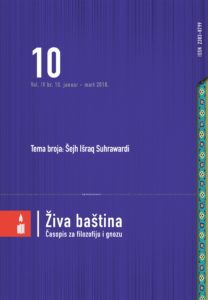 Summary/Abstract: The paper sheds light on the presence and philosophical interpretations of verses of Qur’an in Suhrawardi’s well known work ikmetul-ishrā indirectly by pointing to the relations between Islamic philosphy towards the Book of Islam. It is evident that this aspect of Suhrawardi’s philosophy is in the shadow of other philosophical discussions, which motivated us to write this paper by applying the historic and hermenautic methods. At the beginning, a short biography of Suhrawardi is offered with a wider list of books about him written in Bosnian language, the relation between Qur’an and Islamic philosophy, i.e. Suhrawardi, is presented, followed by his interpretations of parts of Qur’an in the order in which they were presented in the mentioned book. In two places, the paper presents a direct impact of Qur’an’s wisdom on the knowledge of the Islamic philosophy, about God’s Knowledge and eshatology. Interest¬ingly, Surhawardi quoted words of Qur’an to demonstrate that Plato’s belifs were close to the teaching of Islam, as well as terminology of Qur’an in his speech about mystical quest. As a conclusion, Suhrawardi quotes twenty three ayahs and interprets them with his favourite te’vīl method, by developing multi-layered interpretations which will permanently shape the second of the three main philosophical schools of Islamic philosophy.