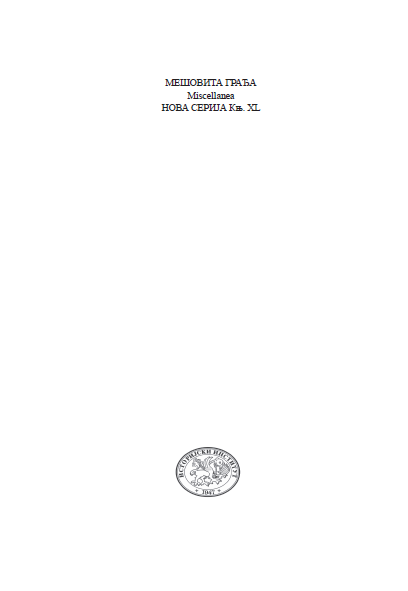 Summary/Abstract: Every bishop, including the Metropolitan from the Metropolitanate of Karlovci, had various sorts of income from his bishopric. These were collected by the bishops themselves when visiting the bishopric, or by exarchs (vicars) on behalf of the Metropolitan. There were several exarchs for Syrmia, which was an area under metropolitan’s direct spiritual authority. In November 1758, Metropolitan Pavle Nenadović sent exarch Pahomije Knežević to a part of Syrmia and up to March of 1759, he went to 62 settlements and collected Metropolitan’s income from the priests (sidoksija) and believers (dimnica and konak). From several places, he brought money earned as a wedding tax or contribution to the soul of the dead. Apart from that, he collected the tax called milostinja (benefaction), which was as high as the believers decided it should be. The protocol made by exarch Pahomije during the visitation gives us both financial data and information on the state of churches, schools and teachers. Having in mind that this was e time of intense work on the advancement of the Serbian educational system and creation of sacral art in the baroque style, we can see from the protocol how these processes were progressing, including the process of the initiation and acceptance of long-lasting surnames.