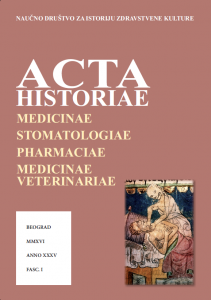 Summary/Abstract: Th e plague in history left many consequences on society, not just on population itself, but also in cultural, sociological and psychological sense. Although way to cure it was unknown for a long time, in time it was noticed that isolating infected persons, settlements or areas diminish destructive eff ects of the disease, but despite that knowledge in severe epidemics it was diffi cult to isolate settlements, and that amplifi ed consequences. Th e plague that spread from Ottoman Empire into Habsburg monarchy during their war (1737–1739) caused serious problems in Hungarian territory. Serbs, who lived there and fought the war as Austrian soldiers, were engulfed by that epidemic that spread outside area of direct battles and military camps. Th is paper shows what fi ghting against this epidemic looked like in the microunits – Taban, i.e. Serbian part of Budim (Buda), Sentandreja (Szentendre) and village of Pomaz, what were diff erences between them, how they were isolated and where epidemics left strongest marks. Paper is primarily based on unpublished archive materials from Fond “B” of Archive of Serbian Academy of Science and Art in Sremski Karlovci, mostly written by priests to Budim bishop Vasilije Dimitrijević.