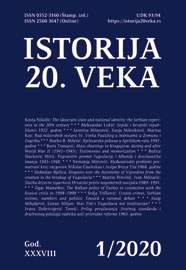 Summary/Abstract: The number of Serbs who were murdered by the Croatian Ustaša regime is still contentious, even though there is broad agreement on the figures among expert historians. The issue is blurred by authors who ignore the canon of scientific discovery. Ustaša terror was awful enough, the author argues. Distorted numbers trivialize debate and degrade the victims.