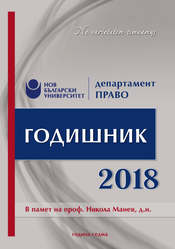 Що е то социалистическа правова държава?
What is a Socialist State under the Rule of Law?

Summary/Abstract: In the Nineteenth All-Union Conference of the Communist Party of the Soviet Union of 1988emerges the concept of “socialist state under the rule of law“. What is that hybrid construct, whichclaims to be a successor of the “socialist legality“ in the USSR? Is it rule of law or is it a newideological hybrid born out of the same type of social engineering? The starting point of this researchis the historical and theoretical paradigm of “socialist legality“. The analysis shifts from theSoviet to Bulgarian context because the events, the concepts and the theory in Bulgaria during theperiod of totalitarian state and law literally copy and follow what has happened in the USSR. Asany other class concept “socialist legality“develops and functions in controversy to the “bourgeoislegality“that turns out to be the very concept of rule of law under a new name as given bythe socialist state and law textbooks. That’s why of particular interest are the political and scientificprocedure employed to restate the ideas of the rule of law during the “perestroika“so that they can be filled in with new “socialist“content.