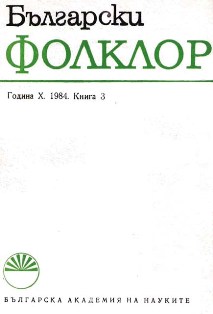 Summary/Abstract: Stone reliefs from the National Revival on church and monastery edifices represent a specific „chronicle” conveying motifs which stirred the imagination of the patriarchal community. Beside religious representations, a great number of reliefs were created which expressed folk ideas and contents using the means of plastic art. Their wide spread, which was most intensive particularly about the middle of the past century, was due to extra-artistic incentives: they served as amulets or preservative tokens. This fact predetermined their position as well as the primitive make of most of them. The preservative token may perform its function even with poor artistic qualities, suffice it be present on the stone. The motifs here discussed present remnants from a collective extrapersonal „symbolism”; the contents implicated in them is mythological and almost unformulable in terms or conceptions. During the National Revival these folklore motifs underwent a genuine bloom although many of them were deeply rooted in medieval patterns. Equivalents between verbal and pictorial motifs are not few but stone reliefs do not necessarily have verbal analogues.