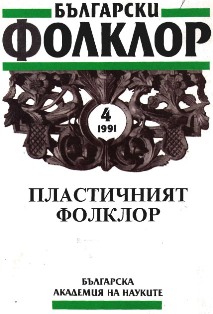 Summary/Abstract: What is the reason why the double-headed eagle was so widely spread in Bulgarian folk art during the ХVШ-ХIХ сс.? The habitual answer is that it was an element of the national emblems of Russia and of the Constantinople Patriarchate. Actually, however, а great number of depictions with double-headed eagles in them have nothing in common with the insignia neither of the Russian state, nor of the Patriarchate. While during the Middle Ages the double-headed eagle was spread out only in the official art, in the ХIХ с. it permeated through the folk artistic activities and turned into а folklore symbol: а solar rosette was usually inserted into its body; it was guarded by lamias and snakes; the solar disc was set in its beak; an aureole was put around its heads – and all this can be found in depictions on belt-buckles, trays, icon-stands and so on. Dating back to the second millennium В. C. the double-headed eagle bears the elements of sacrality. Therein lies one of the reasons why it became royal insignia in Byzantium, the Seldjuk Sultanate, Bulgaria, the Latin Empire, etc. There an explanation should be searched for the extraordinary piety of the folk crafter from the National Revival Period towards this symbol: in that sacred emanation which made it equal to the solar signs, to the life-tree and others of the kind and furthermore constituted it as the emblem of two orthodox institutions.