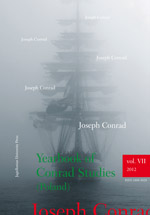 Summary/Abstract: In this essay I attempt to analyse Joseph Conrad’s ‘autobiography’ — as it is presented in Some Reminiscences — with particular reference to the enduring cultural patterns that it exhibits. According to the configurationist or “culture and personality” approach elaborated by American anthropologists such as Ruth Benedict and Ralph Linton, patterns of behaviour transmitted within particular cultural groups permanently configure the personality model of its members both at the level of everyday behaviour and at the level of ideal patterns. This is confi rmed by an analysis of Conrad’s autobiography, in which the writer draws on the ideal patterns of the culture of the Polish eastern borderlands (which he acquired during the process of socialization) — not only in order to analyse his own personality, but also to govern his behaviour in completely different cultural contexts. Even more interestingly, these behavioural patterns have confi gured the particular model of the world that is reflected in the very structure of Conrad’s works. In this connection the influence of the gawęda or ‘Polish nobleman’s tale’ would seem to be indisputable. It is not so much that Conrad alludes to this literary convention in his autobiographical reminiscences, but rather that he uses it to re-create the model (based on cultural patterns) of the imagination of a Polish nobleman from the eastern borderlands. Moreover, this culturally determined writing strategy is used in Conrad’s other works.