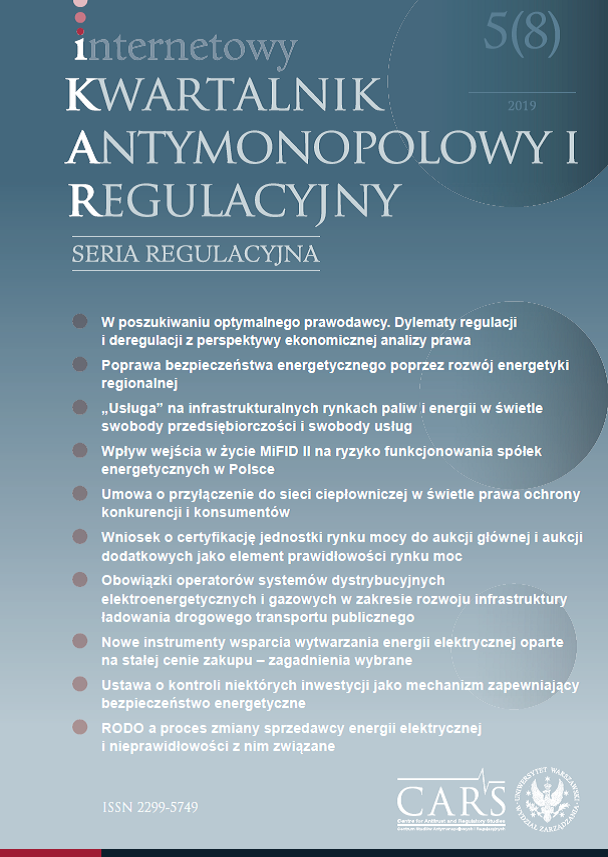 Summary/Abstract: In 2015 the Polish Parliament enacted the Control of Certain Investment Act (the Act), which introduces a special legal regime regulating the acquisition of shares, enterprise or organized parts of an enterprise, of businesses entered on the list of protected companies. The main goal of this regulation is to introduce administrative law mechanisms which protect companies of a strategic importance to national safety against hostile takeovers conducted by foreign entities. In the current legislative status, half of the protected companies pursuant to the Act are companies operating in the energy sector or closely related sectors. Therefore, the supervision over the trading in inter alia shares of such companies, conducted by the minister competent in the matters of energy, constitutes a material element aiming to guarantee the protection of broadly defined energy safety. However, the Act in the current state is imprecise and gives to the minister competent in the matters of energy a very broad level of interpretational margin through instruments, which in practice, allow the minister to oppose any transaction resulting in the acquisition of a material interest or a dominant position in energy companies protected under the Act. Furthermore, an analysis of the most important instruments regulated under the Act, such as ex ante and ex post notifications, as well as administrative decisions regulated under the Act, indicates numerous interpretational problems occurring under this regulation. In particular, key material doubts concern the application of the rules on a silent disposal of a case to proceedings regulated under the Act, the legal nature of the administrative decision issued under the Act, as well as selected issues regarding ex ante and ex post notifications. Taking into consideration the importance of the Act for national energy safety, and the implications of the Act with regard to energy law, the Act in the current state should be judged negatively.