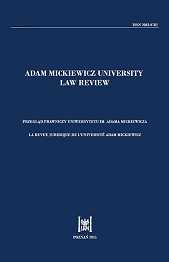 Summary/Abstract: The process of Europeanisation in the legal field results in various conflicts between the Member States and European authorities. Cases concerning State aid are an example of such a conflict, where on one hand Member States want to preserve control over various supporting schemes and on the other the European Commission and the Court of Justice of the European Union through a set of judgements and decisions increase their supervisory power over the supporting schemes. The European jurisprudence tend to stretch the scope of State aid by expanding the definition of State resources, which is one of its prerequisites. Applying of such a broad definition of State resources to Polish green certificates scheme and the auction scheme shows negative results of this approach that not only decreases the efficiency of the Renewable Energy Sources supporting schemes but that has a negative reflection on the whole State aid system.