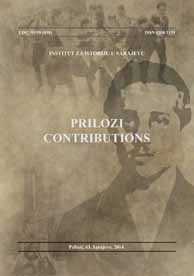 Summary/Abstract: Worldviews and political ambitions of Young Bosnians were a far cry from later and contemporary emanations of Serbian nationalism, as evident in their Yugoslavism and staunch anti-clericalism. They should neither be praised for what they did nor blamed for what happened later. Their act can be understood and interpreted only in its own historical context, which opens new avenues for research away from false analogies and political abuses.