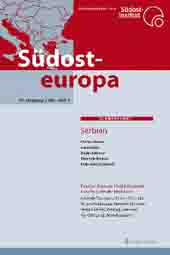 Summary/Abstract: Abstract. After Slobodan Milošević was ousted from power, one of the first steps of the new democratic government of Prime Minister Zoran Đinđić was to introduce religious education in state schools. Although only one and eventually the least successful part of Đinđić’s political strategy, allying with the Serbian Orthodox Church (SOC) became a steady component of political rule in Serbia. While not a novelty in the Balkans or Eastern Europe, in Serbia the alliance with the Church is a significant and symbolic departure from Milošević’s rule. The confessional allegiance and faith became chief legitimizing devices, supplementing or replacing the nationalism and social populism of Milošević’s era, and filling up an ideological void. In addition to the introduction of religious education in schools, the effects of the alliance of the political elites with the SOC in the last few years have been, among other things, a new law on religious communities which secures a special status to the so-called traditional churches; privileging traditional churches in the procedure for returning nationalized property; an officially sanctioned influence of the SOC on the media; increased public spending on the churches, especially the SOC; worsening relations with Romania, Macedonia and Montenegro by following the SOC’s or individual bishops’ policies; dismissing legal proceedings against SOC clergy; as well as growing discrimination against small religious communities.