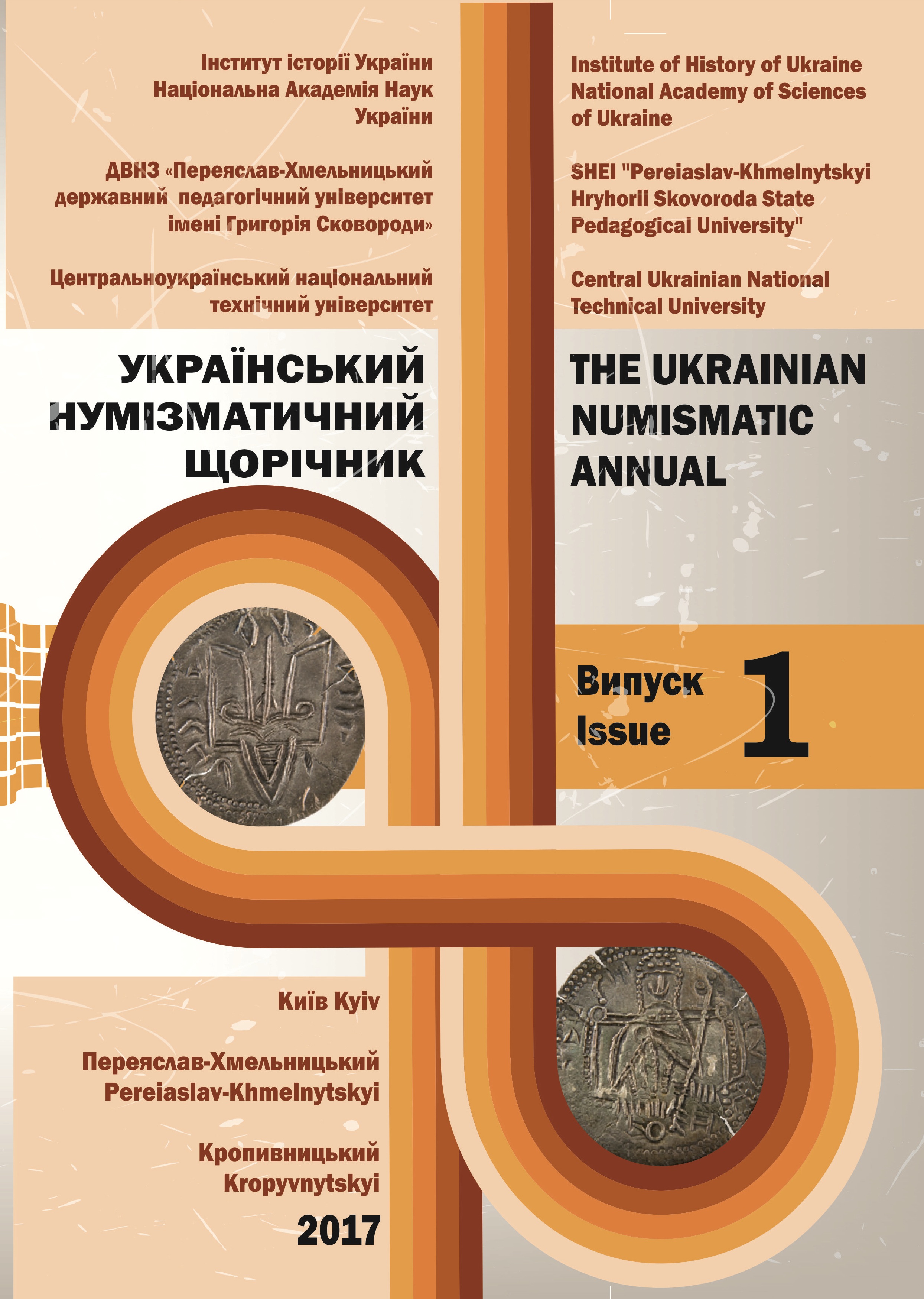 Summary/Abstract: In this article we tell about the aspect of the money counterfeiting in Ukraine during the WWI, introducing into the scientific circulation previously unpublished sources that allow us to open a new page in the history of monetary circulation. As we know, samples for counterfeiting have been chosen among the most popular money in the circulation. Such money during the First World War were gold and silver coins, credit notes issued during the war by the pre-war model (differing in the signature of the cashier on a bank note), the exchange of marks and treasury marks, various money surrogates. All these types of money were reproduced by counterfeiters in the specified period. Analyzing the archival sources we were able to establish the facts of the attempted economic sabotage by Austria-Hungary and Germany in relation to the Russian Empire by manufacturing of the quality counterfeits of Russian credit notes and their sale in Galicia. Following the messages on the pages of newspapers of that period, we were able to study and describe the activity of non-legal groups of counterfeiters who manufactured the exchange stamps in Kiev and Odessa. During the whole of 1916, the Kiev newspaper “Vechernaya Gazeta” (Evening Newspaper) reported about the appearance in Kiev of counterfeit exchange marks with nominal value of 20 kopecks, and in Odesa – intermediate stamps with themoninal value of 15 kopecks, and events related to the turnover of these falsifications. Investigative authorities managed to expose a number of underground printing houses and neutralize the work of counterfeiters. After analyzing the information highlighted in the Kiev and Odessa newspapers about counterfeiters, we can conclude that the manufacture of counterfeits was carried out on professional industrial equipment, medium-sized exchange stamps were chosen as samples, sales were carried out in the vicinity of cities or in large markets. The principle of choosing as a sample for counterfeiting the average nominal value was also noted in cases of counterfeiting of credit notes, as evidenced by archival documents and newspapers of that time. Among the counterfeits of credit notes of the Russian Empire are notes with denominations of 3 rubles. On December 6, 1915, Treasury bills with denominations in kopecks appeared in the circulation, which should also serve for small money circulation and small-scale trade. In this study, we were able to detect and analyze the private counterfeits of the most popular among the specified series of treasury bills – 50 kopecks of the issue of 1915. With the growing costs of warfare, the demand for money supply increased rapidly, therefore, because of the time-saving and production resources, on the banknotes of nominal value of 1, 3, 5 and 10 rubles the same, considerably shorter than the previous notes the serial number and a letter series. The population immediately suspected these new banknotes highly likely to be false, on the basis of which the Government provided relevant explanations to the public, recognizing these issues as state-owned. Police detected by fake coins or banknotes during searches played the role of material evidence, but were most often destroyed after the investigation. It can be assumed that such a fate awaited the counterfeits found in private individuals in order to prevent their repeated attempts to enter into circulation and attempts to kidnap and re-deception the population. That is why today most of the known counterfeits are the result of random finds, less often fake coins and credit notes are stored in collections of museums. Founded in our time fake coins during the WWI often bear traces of attempts to destroy them. We assume that now-known forgery coin pieces from the now-known collections could be made illegally during the "coin hunger" and the financial crisis, while coins with dates up to 1914 could be selected as a model for counterfeiting. Therefore, the obvious counterfeits made during the WWI are false Russian coins bearing their mole dates from 1914-1917. At the various times, the process of counterfeiting of money attracted criminals of different social strata and representatives of the most diverse professions. Often, this type of the crime was detained by masters of working with metal (blacksmiths, founders, masters of repairing watches and mechanisms, gunsmiths, engravers, sculptors, etc.). By studying the documents of the investigated period, we were able to find evidence of the involvement of representatives of the investigating authorities in counterfeiters. Pre-revolutionary newspaper periodicals also contain valuable evidence of litigation on counterfeiters and sentences handed down by them. Curiosity for falsifiers was not only monetary, but also other liquid assets: securities, post duty stamps, separate coupons for bonds, as well as forged passports, mobilization certificates, documents for traveling abroad, etc. Due to the collapse of the Russian Empire and serious political transformations, the structure of monetary circulation in Ukraine is changing completely, and, accordingly, counterfeiting takes on a new different character, which is the subject of a separate in-depth study. Virtually all money used by the population in circulation was used to counterfeit private individuals for illegal profit.