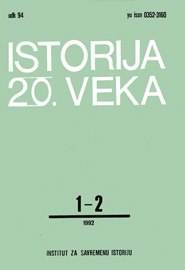 Summary/Abstract: The author's discussion about Paul Garde’s book »Vie et mort de Yougoslavie«, published in Paris by the famous Fayard, refers to contemporary French historiography and jounalism which in dealing with the crisis in Yugoslavia founds its viewpoint on pretended historical analysis. The author has made a study, based on positive findings of Yugoslav historiography, of this singular »adventure of the spirit« written by Garde in the face of the war in Yugoslavia. The question posed in this study is whether there is truth in Garde’s statements made in the Introduction, in which he speaks of his objective and impartial approach to »all the participants in the drama«, Analysis shows that these claims are unfounded in many instances, as are many of Garde's historical reminiscences. Approximately one hundred mistakes were found among historical facts alone. In three extensive and comprehensive ports (History, Panorama and Tragedy), Garde’s historical perspective stretches from the Middle Ages to the present 1992 and culminates in his conclusion that the immediate causes of the Yugoslav tragedy are to be found in the phenomenon which he calls »la revolution culturelle Serbe« (1986), which he associates with the »Chinese cultural revolution« phenomenon and other similar revolutions in the communist world and finds its theoretical core in the Memorandum issued by the Serbian Academy of Sciences and Arts. Garde's book, now very popular in France, shows all the limitations, resulting from lack of knowledge, of Europe's understanding of circumstances in Yugoslavia, both past and present.