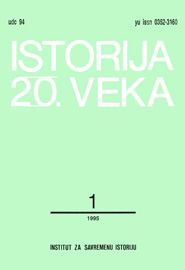 Summary/Abstract: The magazine »Annals« has commenced a critical review of a movement which it represented for more then half a century and which sovereignly ruled French modern history, precisely on the magazine’s 60th anniversary (1929—1989). It was asked why after half a century of coperation, established in 1929, between historians and representatives of other social sciences — especially sociology — this cooperation is no longer effective, or not as effective as it used to be and why a new epistemological classification was necessary. This is caused by the general atmosphere of change from one epoch to the next, the memory of the crucial events of the 20th century, which are slowly passing from the sum of individual memories into the sphere of collective memory, thereby inspiring a different type of interest. The repeated insistence on the existence of many layers of history, on the phenomenom of »long duration«, has numbed the sensibility of some French historians, those glose to annalists, to events which represent the »new« in history, and this at a time when reality in most parts of the world has disputed the models of »medium« and »short« duration (conditions and events), so readily used in modern history: for instance the social practice which in the sphere of modern history produced and kept up »real socialism« in the countries of East Europe. Some of the significant topics attracting the attention of French historians are: the social and political crisis in France between the world wars, the Second World War, the Resistance and the embarrassing question of collaboration, especially in view of the persecution and extradition of Jews, problems of colonial history and decolonization and, the most recent problem matter, the forms and crisis of socialism as practiced in France and other European countries.