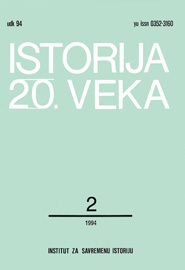 Summary/Abstract: The article is concerned with the celebrations held in Great Britain in honor of Vidovdan during World War I. Together with a review of the celebrations held in memory of this important date in Serbian history, the article gives a survey of all the other acts of solidarity with the Serbian people, foremost those involving the collecting of sanitary and other material aid.The first and largest celebration of Vidovdan during World War I,took place in 1916 and has been given the most attention in the article. All other accompanying manifestations have also been presented in the article, with a special analysis of the writing of the British press, which at the time issued over 400 articles and other writings concerning Serbian history, as well as numerous pamphlets, printed in nearly 200.000 copies. The writing of the press and the published pamphlets had considerable influence in effecting a positive view of the British public regarding the unification of the Yugoslav peoples.