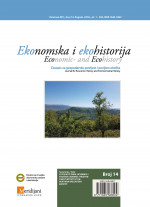 Summary/Abstract: In questioning the traditional degradationist narrative about the history of the Classical Karst woodland, the article demonstrates the rationality of the forms of use by the peasant population. In the first chapter interpretations about the actors and factors of Karst »deforestation« are presented and discussed. Reducing the subjects responsible for the »destruction of forests« to Venice and the local peasants appears simplistic, since the factors of forest resources consumption were numerous in a pre-industrial economy. In the second chapter the early modern peasants’ woodland and pasture land-use system is presented, demonstrating how the Karst inhabitants did not destroy the woods and trees, but used them. Every single tree was there with a specific purpose. In determining their use peasants based on the characteristics of the karstic terrain, the climatic conditions and the experimented vegetative capacity of the species. According to their practical knowledge, they considered that a »real forest« was not economically justified in the Karst. Only the trees necessary to cover domestic and agricultural needs were allowed to grow, and coppice was the chosen form. The third chapter reconstructs a long-run historical parable of the Karst forests, connecting research results in historiography and archaeology. The barren landscape famous in the 19th c. was indeed the result of a process going on through the early modern period, but it had antecedents in earlier historical and prehistorical periods. Attention is drawn to the fact that the early-modern Karst landscape closely resembles the form of a manmade (cultural) savannah, as the expression of an agro-silvo-pastoral system. In the end, a so-far unknown statute of the village community of Rihemberk (mid-16th c.) certifies and dates intentional sustainable forestry practices by the rural population. At the end of the 19th c. the Karst ecosystem was still vital, demonstrating that local people knew how to exploit this vitality and preserve it over time, albeit in a modified environment. The traditional Karst landscape was the result of a rational use of its natural assets, based on the environmental potentials and deeply rooted local ecological knowledge, put into service of the local population’s economic and social system, values and goals.