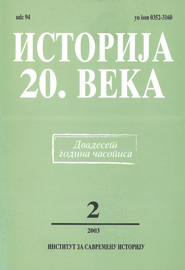 Summary/Abstract: In the autumn of 1914, political and military establishment in Paris and London, faced with horrifying victims and negligible success of their armies at the western front, started to think about opening of the peripheral fronts. There they expected to win military victories and achieve relevant political and diplomatic success with fewer human victims. Among other things, they were encouraged to this by the victories of Serbian arms in summer and autumn of the same year. It was expected from the allied establishment that the appearance of their divisions would encourage the governments of neutral countries (Greece, Romania, Bulgaria, Italy) to join allied orders, strengthen the resistance of exhausted Serbia and alleviate the pressure on fatigued Russian armies. Such beliefs of individuals soon came to resistance of two western forces’ political and military structures. Regardless of the obvious prospects for success, the Balkans was unknown and distant to them. Thus, they watched the participation in military political operations with distrust and dislike. Generals and politicians were not able or did not want to perceive the benefits from such actions. They regarded them as adventure and unnecessary risk that created difficulties in their planning and performing. They were confined with belief that the War could be won only by mass victory at the western front, forgetting the enormous human sufferings and victims. Limitation and fear narrowed their views, ability to estimate advantages and disadvantages, benefits and losses. Due to this they missed their chance to preserve Balkan countries from disaster or joining Central forces (Bulgaria), defeat (Serbia) and resistance (Greece).