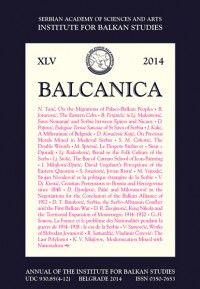 Summary/Abstract: This article discusses the abortive efforts of King Nikola of Montenegro to achieve territorial expansion for his country during the First World War. Although he was a believer in the unification of Serbdom, he wanted to achieve it under his leadership rather than that of the Serbian Karadjordjević dynasty, and therefore had no intention of letting Montenegro be simply merged with Serbia and his family pushed into the background. Therefore, King Nikola campaigned not just for the preservation of Montenegro as an independent state, but also for its considerable territorial expansion, mostly at the expense of Austria-Hungary, and also at that of Serbia and Albania. He did not desist from his endeavours even at the time of his exile following the capitulation and occupation of Montenegro in 1916; on the contrary, it was then that his demands were most comprehensive. However, he could not resist the reality on the ground during and in the wake of the war, and all his efforts remained useless.