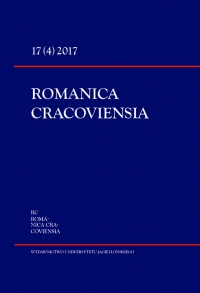 Summary/Abstract: This article deals with the French-to-Polish translation of a specific case of reported speech: the investigated examples from literary texts are, from a semantic point of view, paraphrases by the narrator, who formulates the words of the characters in reported speech. They do not, however, only express his point of view (this is a form of reported speech called mixed or mimetic). In the Polish text, the discourse of the characters includes graphic, grammatical or lexical ant indicators, as well as the interpretation of statements in the context of the translation ‘s reader. A few important guidelines are given, on the basis of which the reader can interpret the passages in which the reported speech comes close to direct speech or to speech in a situation. Attention has also been paid to the modifications that the narrator’s speech undergoes when their discourse creates the context of the speech of the character.