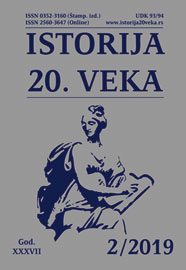 Summary/Abstract: Paper analyses political fall of Stanko Opačić Ćanica in year 1950, his arrest, interrogation, incarceration on Goli otok labor camp and subsequent surveillance after the release by the Yugoslav secret police. The paper is based on State security documents, scientific literature, published documents and oral history of former Goli otok inmates. The goal of this paper is contribution to the analysis of causes and consequences of Opačić’s political fall, closely tied to the fate of so called “ministerial troika“, group of Serbian ministers in the government of Peoples Republic of Croatia. This case is, of course, part of wider analysis on causes of purges of real alleged supporters to Soviet Union during the Tito-Stalin split.