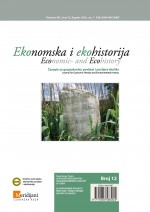 Summary/Abstract: Goli otok (Barren Island) served as a site of a political prison and labour camp which was founded in 1949, at the peak of the Tito- Stalin political dispute. It was in function until 1956, when its operation as a political prison for Yugoslav pro- Cominformist dissidents was discontinued. During this period, at least 13 000 political prisoners were incarcerated on the island. Due to the covert nature of its workings between 1949 and 1956, it had been covered up and ignored as a topic during most of the Yugoslav period by the public and the historians alike. In 1980s, however, the narratives about Goli otok began to gradually reach the public. After the break up of the SFR Yugoslavia, a handful of historians who dealt with the topic of Goli otok mainly focused on the socio- political aspects of this political prison and labour camp’s past, drawing on a large body of former inmates’ testimonies about the harsh everyday life in the camp and the peculiar methods of its orchestration. However, the impact of Goli otok political prison and labour camp was not, of course, only limited to the Yugoslav socio- political climate and the individuals living in these times. Its influence is also noticeable on the very site of the labour camp- the island. Hard forced labour undertaken by thousands of political prisoners which included the construction of several workshops and small factories orientated towards the production and the distribution of various stone and wood products is but one of the factors which dramatically influenced the island’s environment. Human dwellings and accompanying industrial constructions erected on the island’s desert- like stone terrain, as well as the now afforested portions of once (literally) barren island are just some of the examples. In other words, the forced labour of the incarcerated thousands is inextricable from the impact on island’s environment, albeit the nominal purpose of this labour was ‘corrective’. This paper therefore aims to contribute to the study of Goli otok from the viewpoint of environmental history. The paper speaks to the works of the authors dealing with the environmental, carceral and labour history aspects in the study of USSR Gulag as one of the examples relatable to the Goli otok story. In so doing, the paper aims to contextualise Goli otok within a wider scholarly space, considering the geographical, ideological implications, as well as those of environmental and socio- political history.