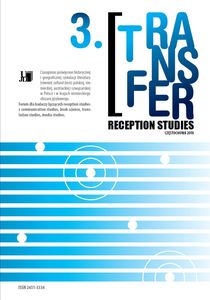 Summary/Abstract: The aim of this paper is to show the possible difficulties which might be encountered by the translators who resolve to recreate in the target texts the images related to the reality depicted in the recent Polish poets, such as Marcin Świetlicki, Ewa Sonnenberg, Michał Sobol and Jacek Dehnel. It is an artistic manifestation practically unknown to the Spanish-language reader, so the purpose of our study is also to create the possibility of familiarizing with the poetry that has been published in Poland during the last years. It is proposed to make a comparative analysis between the original verses and the Spanish versions to find out if the stylistic and formal organization of the works from which emerges “the adoption of paths of creative freedom and fidelity to one’s own voice” (Antonio Colinas) by their authors has been preserved in the target texts. When thinking about the specificity of this poetry and the way of revealing it in the translation process, it is used the idea of the translation of lyric texts as a recontextualisation of the original verses in another language put forward by Lawrence Venuti. We also take into account the observations of Antoine Berman and his concept of translation as “the trial of the foreign” to verify if and to what extent the solutions adopted by the translators have distanced the target recipient from the qualities of the original and sometimes distant reality. Finally, and thinking about the recreational aspect of the translation process, we also focus on the notion of “serial thought” described by Umberto Eco and its use in the field of translation. The presented examples sketch the Hispanic reception of the latest Polish poetry and indicate that its aesthetic intentionality reflected in the analyzed translations may be a part of the target literary tradition.