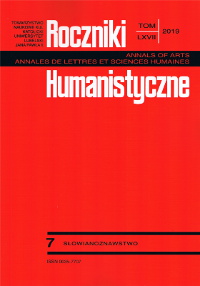 Summary/Abstract: This paper discusses role of Christian aesthetics for defining the religious identity of Old Rus’. Attempting a multidisciplinary approach, it follows the Hypatian Codex to trace the challenges and difficulties encountered by the introduction, with the Baptism of 988, of a new faith. Having reviewed historical surveys and sources and drawn upon the studies in paleography, archaeology, linguistics, and art history, the author emphasizes aesthetic aspect of Rus’ cultural evolution. In conclusion the paper maintains that the visual arts, such as architecture and sacral paintings, have played an essential role in the protracted process of absorption and subordination of the pagan tradition.