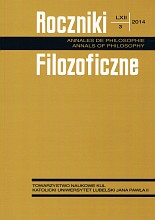 Summary/Abstract: The paper is an attempt to present philosophical views of one of the currently most prominent Russian thinkers, Sergey Khoruzhy, through the prism of critique of Pavel Florensky’s thought. The latter—a genius and a martyr (as he is thought to be)—like most of the religious philosophers of the so-called Silver Age of Russian culture, seems to be far removed from the mainsteam of Orthodox spiritual tradition—hesychasm. The said tradition can be described as energetism whereas Florensky’s thought is best viewed as essentialism. Energetism, a quite enigmatic concept from the Western perspective, appears as fundamental concept of Khoruzy’s own philosophical conception—synergetic anthropology. Khoruzhy recognizes importance of Florensky’s thought but he considers it of historical value only. These and other points are elaborated in presented paper.