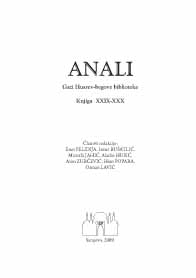 Summary/Abstract: The Gazi Husrev-bey Library holds a significant number of original and copied Ottoman vasijjetnamas which were recorded in sidjils covering mainly the period between 1762 and 1936. The vasijjetnama in diplomatic and legal sense represent a special document. However, in part of our oriental literature, the concept of vakufnama is often identified as vasijjetnama, especially when it comes to cataloging and literary elaboration. Because of that, in this work we will give diplomatic elaboration of vasijjetnama and, as appendices to it, translation of two very characteristic Ottoman vasijjetnamas is given under title: ‘’Vasijjetnama in Ottoman language’’. In this work, definition of vasijjetnama is given in diplomatic sense and it is sad that it is a special document in which special will of testator is given in one or many vasijjet (will), which deal with still unrealized conditions of testator. As far as vakufnama is concerned, it is document with particular diplomatic structure with confirmation of legality of testator’s condition and discloses the act of their realization. In this work three types of Ottoman vasijjetnamas were analyzed: vasijjetnama as a spiritual testament, usual vasijjetnama as testament which precede official registration of establishment of vakuf endowment and vasijjetnama devoted to treatment of dying and death person who were originate by following exemplary of Birgivijina vasijjetnama. Short regesta of all mentioned vasijjetnama were given with notes in detail which could be useful to different researchers and particularly to those who can not use Ottoman language.