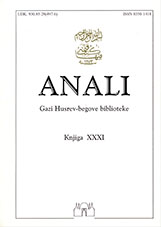 Summary/Abstract: The work presents the documents which typified the Ottoman way of administration in the eyalet of Bosnia. Special attention is paid to the peculiarities of short sahha-buyruldis issued by valis and bearing the sign of sahha/sahh, followed by short buyruldis issued by kaymakams and mutesellims with the characteristic penča. These penčas were important in the official processing of the above-mentioned documents in which requests, complaints, collective petitions, proposals and reports were expressed. The article is motivated by the need to point out the diplomatic features of the documents and the ways in which they were studied and registered, given that they have frequently been misnamed and misunderstood, or even worse, that they have not been particularly studied by our historiography and Oriental studies. Emphasis is placed on the manner of communication between the lower and higher officials of the local and provincial government on the one hand, and of all classes of society including dhimmis, Jews and others with state bodies at local and central level, on the other. Arzuhals, mahzars and arzes are presented as documents for initiating official communication, indicating a problem or a personal need and for looking for a solution and intervention by the authorities. In this sense the article explains the process of communication through charts, copies (surets) of the above-mentioned documents and by presenting registration procedures and various levels of official processing of the documents. The chief contribution of the article is that it gives examples of official processing of documents at a local level in contrast to authors such as Uzunçarşılı, Nedkov, Velkov, Kütükoğlü and others who give examples of the documents from the highest level and which are preserved in the state archives in Istanbul. The article gives a full transcription of several typical documents kept in Gazi Husrev-beg Library and their form.